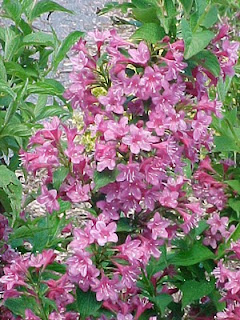 The genus Weigela was named for C.E. Von Weigel, a German professor. There are about 10 species of shrubs from eastern Asia in the genus. All are deciduous and easily grown.

The Chinese species are all attractive and many have been hybridised to produce a range of improved hybrids and cultivars to such an extent there are few wild or original plants left.  Assigning species names to the cultivars has been difficult and often these are now left out of the name as it  can be confusing for gardeners.

Weigelas are often called flowering apple blossoms because of there extremely free flowering in spring and their adaptability to a wide range of garden conditions. The trumpet shaped flowers have a wide open mouth showing of some detailed marking inside the flower. Usually the flowers are up to 35 mm long and about 25 mm wide. Colours vary  from pure white to dark rosy pinks and deep reds. They grow up to 2 metres high.

Regular pruning out of old wood after flowering in late spring will keep it vigorous and healthy.

Other forms of Weigela that may be spotted in gardens include

Email ThisBlogThis!Share to TwitterShare to FacebookShare to Pinterest
Labels: Shrub

Another 'spring' favourite .... Unfortunately we have a very large pink flowered variety ...Prefer the red .....which is rare around here

I have now found a place to get my garden fix during winter. Your pics and narrative are wonderful.
Thanks
jim