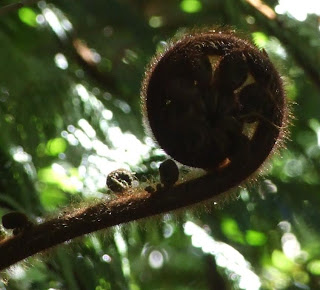 This is the most easily recognised ferns in New Zealand because of its distinctive bright silvery underside to the fronds. On young plants the undersides have not developed this silvery colour as it takes several years for it to develop. Once the colouration has started each new frond becomes more silvery until all the fronds are typical of the species.

Every New Zealander should know this fern. To identify the Silver Fern all you need to do is turn the frond over. The other major problem is that people call it punga. This is incorrect and it is Ponga. Punga is a misused word as it does not apply to any fern in New Zealand at all although people tend to use it for all tree ferns.

As it is also our National Emblem we should all get it right and correct those who get it wrong.

It is a beautiful tree fern quite hardy but susceptible to some wind damage in exposed places. In nature it grows in dryer bush areas enabling it to adapt todryer gardens without a problem. As a slower growing tree fern it takes some time to attain a good size but that can be an advantage in the home garden.

In nature it can grow up to 9 metres high albeit very slowly and with a relatively narrow stem. Old fronds tend to hang down from beneath the colourful fronds as a protective skirt.

It is easy to grow in the garden and for those with kiwi pride it makes a nice feature plant.

•       The silver fern has long been used on dairy products and was trademarked as early as 1885.

•       It is a logo for many other organisations, such as (heavily stylised) the rail infrastructure owner OnTrack.

Silver fern leaves appear on the coat of arms for New Zealand and the Silver Fern is also used extensively within politics and printed material use by the government. It is used extensively as a symbol for our National sports teams.

The Koru symbol (new life) found in Maori Art is inspired by the shape of the young Ponga frond. 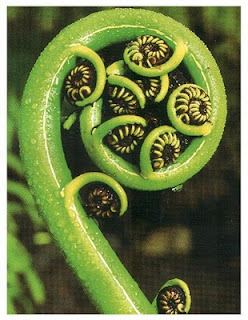 Email ThisBlogThis!Share to TwitterShare to FacebookShare to Pinterest
Labels: Fern

Striking and beautiful photography. Ferns are quite remarkable. I wish it might be hardy here but think New England a bit too cold.

One of my favourites ..Our garden and forest surrounding it is full of ferns - Black, brown and Silver :O)