ANZAC (Australian and New Zealand Army Corps) DAY is a day of Remembrance for those NZ Servicemen and women who have died in the various wars. The first ANZAC Day was held in Turkey one year after the fateful landing of troops into Turkey in the Dardanelle Straits on World War I. This landing and subsequent fighting took many NZ, Australian and Turkish lives.

New Zealanders and Australians commemorate this in  all the large cities and small towns as well as at ANZAC Cove in Turkey. This year about 7000 New Zealander's Australians and Turks took part in the Dawn Service there.

This photo is of the local war Memorial in Kaiapoi, near Christchurch, about 1 hour after the ceremony finished. 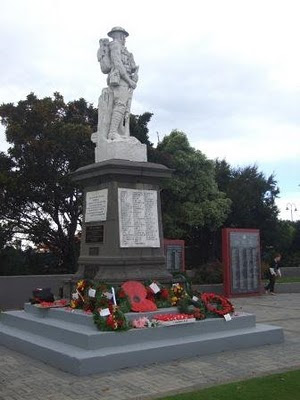