Aconitum japonicum
A native of Japan it grows in the hills and mountain areas. Its leaves are 3-5 lobed deeply cut with some shorter cuts on each part of the leaf giving it a star like appearance. It grows in large clumps with spikes up to about 1 metre high. It is very hardy up to -20C. The flowers are on short spikes often branched.

This is a valued plant because of its excellent foliage and of course its later summer early autumn flowering with its true blue flowers.

Aconitum is a genus of about 100 different species. Perhaps the best known is Aconitum napellus which is known by a variety of names such as Helmut Plant, Turk’s Cap, Friar’s cap, Soldier’s cap, Bears foot, Garden Wolfbane, Garden Monkshood and Monkshood. 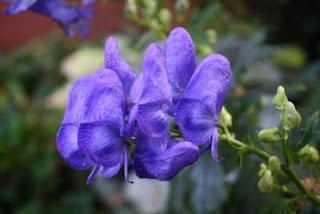 That is a very pretty flower.