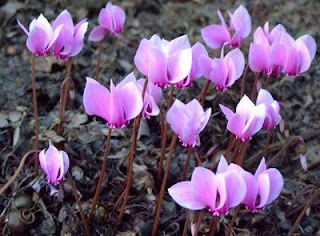 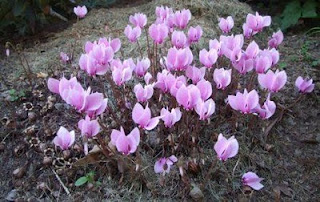 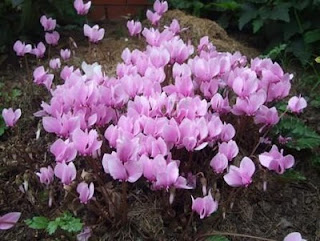 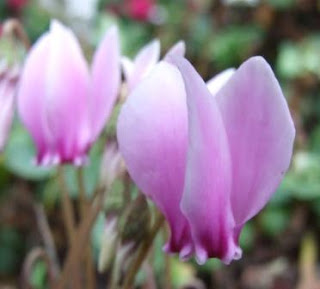 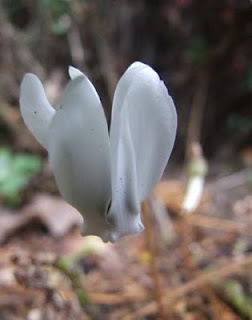 Mid February is near the end of our official summer of December, January and February. The weather is really supposed to be hot but this year is a very cool summer for us. Usually our best months are Late January to mid March.
The photos show the gradual emergence of the cyclamen flowers from one very large cyclamen corm and  a photo of my single white flower currently out.
This is one of the easiest species of hardy cyclamen to grow outside in your home garden. Once established and it flowers well it will set seed and more plants may grow nearby. It makes a great ground cover and produces many flowers often at a time when other flowers have finished.
This hardy species of Cyclamen has a wide distribution stretching from southeastern France, through Italy, Corsica, Sardinia, Sicily, Croatia, Bosnia, Serbia, Albania, Bulgaria, Greece, (including Crete and many of the Aegean Islands) and western Turkey. It inhabits woodland, scrub, and rocky hillsides from sea level to 1300m.
C. hederifolium has pink flowers with a purple-magenta V-shaped blotch at the base of each petal, which appear between January and May in New Zealand. There is also a white flowered form which is now common in cultivation, but scarce in the wild. The many flowers appear either before, or with, the young leaves which are often ivy-like as suggested by the specific epithet. However, the plant is very variable and the leaves can be every shape from almost orbicular to lanceolate. Leaves vary from dull or bright plain green to plain silver with various forms of pattern in between, with the pattern in silver, gray, cream or merely a different colour green. The tuber roots from its top surface and sides.
The plant was for many years known in horticulture as Cyclamen neapolitanum Ten. (1813), and this name erroneously persists today in some nurseries and writings although the name Cyclamen hederifolium Aiton was proposed in1789. Today its correct name is Cyclamen hederifolium.
In 1997, Grey-Wilson revised the classification of the species, identifying two varieties. This recognised that populations in the southern parts of its range, particularly Sicily, Crete and the Mani Peninsula of the Peloponnese differ from other forms.
C.hederifolium var. hederifolium. Which has two forms  C. hederifolium var. hederifolium forma hederifolium which has  prominent patterns on the leaves and deep pink to reddish purple flowers and C. hederifolium var. hederifolium forma albiflorum with pure white or pale pink flowers
C.hederifolium var. confusum. Which has leaves bright green with a poorly defined leaf patterns, leaves thicker and fleshier, shiny, particularly beneath.
C.hederifolium is the most reliable and hardy Cyclamen species, flowering well in the garden and seeding around. It grows well both in full sun and partial shade or beneath deciduous trees. It particularly enjoys growing in soil which contains a good proportion of leaf mould (leaf litter). It easily survives low temperatures, and grows quite happily in  in New Zealand. It naturalises in a variety of areas making a fine show.
The fleshy tubers can survive for up to 50 years in the ground and can grow up to the size of a saucer.
Some cultivars have also been named C.hederifolium.'Album', C.hederifolium 'Pink Pearl' and 'White Pearl'
For more information on the 20 species of Cyclamen visit http://www.cyclamen.org. This is the website for the Cyclamen Society.
Posted by Alan Jolliffe at Sunday, February 14, 2010