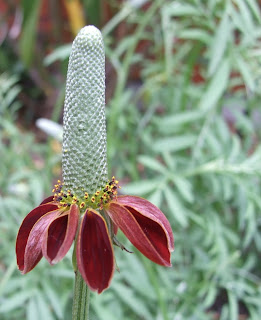 This is an interesting perennial plant for the garden. Some people will not like it because it can grow a little bit straggly and will probably self seed and grow in different parts of the garden, but if you are looking for something unusual try growing this.

In its native habitat of North America, growing From Canada south to northern Mexico and from Minnesota to Texas and is often overlooked as a garden plant because it is quite common and grows on dry open ground. Prairie coneflower is found on dry plains, prairies, waste ground, and along roadsides and railroads . It has well-developed grey green leaves up to 150mm long and 60mm wide, pinnatifid to partly bipinnatifid, with ultimate segments linear to oblong, often very unequal. This species has one to several stems 300mm to 400mm tall. The fruit is a small ashen.

There are about 5 species and flower colour can range from yellow through purple.

Belonging to the Daisy family, Compositae, the flower structure is complex. The large ray flowers at the base produce beautifully coloured petals which unfurl from an intricate oblong case. The remaining disc flowers are small individual flowers which occur on the large erect receptacle which may be up to 30mm long. These flowers progressively open from the bottom to the top. It gets its common name from the shape of the flower which looks exactly like a Mexican Sombero.

For those not knowledgeable of Compositae flower structures a daisy flower head is made up of many individual flowers concentrated along the receptacle (or core). Each opens individually and usually produces only one seed.

The flowers are lovely and a definite talking point. Flower stems are quite long making the flowers easy to pick.

It appears to be a ready seeder so new plants may grow each year. It will grow in relatively poor soil. The seed germinates well and it grows rapidly to a height of nearly 1 metre although it tends to flop a little and can be supported by other plants. It will flower for up to three months.

Bees and Butterflies are attracted to this plants making it god for habitat development.

Being a close relative of the purple coneflower (Echinacea), which is a well-known medicinal plant, it's not surprising that historically Mexican Hat has also been used for its medicinal properties.  The Indians boiled leaves and flowers to make a tea to use externally on snakebites and to reduce symptoms caused by poison ivy.  Tea was made from the leaves and flower heads.  Cheyenne Indians boiled prairie coneflower leaves and stems to make a solution applied externally to draw the poison out of rattlesnake bites.  An infusion was used to relieve the pain of headaches and to treat stomachaches and fevers.
Posted by Alan Jolliffe at Friday, March 06, 2015