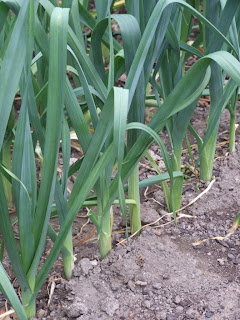 Leeks are hardy and very easy to grow but require a long growing season to achieve a good size. Seed is sown in spring and seedlings either pricked out into containers to grow on a little more or if sown thinly in the ground allow them to grow to about 150mm high.

Once they have reached this size prepare the ground for planting out. Fork the ground deeply and level. Remove the leeks from their growing position and separate the leeks and tease the roots out. Use a large fat dibber and plant them in a row quite deeply so that the base of the leek plant is several centimetres underground. This will blanch the base of the leek plant making it tender and mellow in flavour.

Keep the leeks well watered and weed free through the summer. If you would like longer, blanched leeks mound up a little soil against the stems.

One of the problems with transplanted leeks it that they occasionally go to seed. Proper teasing out of the roots at planting time will usually prevent that happening.

Once they are of a reasonable size they can be harvested when needed direct from the garden. It is usually used as a winter vegetable.

Leeks are used in casseroles, stir fry’s, or other combination meals. They can be chopped and fried in butter or olive oil as a vegetable. Leeks were cooked and served with a white sauce but this seems to be less common now.
Posted by Alan Jolliffe at Wednesday, January 27, 2010

Email ThisBlogThis!Share to TwitterShare to FacebookShare to Pinterest
Labels: Vegetable

leeks are one of the vegetables that have prompted me to dedicate a large part of my garden to 'long season crops' - along with parsnips, brussel sprouts, carrots (big carrots.) I've never tried direct planting them from seed - is that possible?

Hi Jennifer (JP). Yes you certainly can grow leeks from seed. You might try buying seed at first or even later saving your own seed. Great Blog you have. Alan