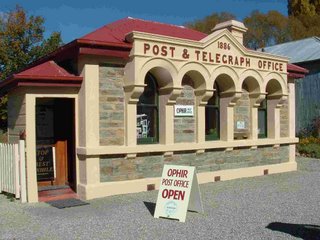 Ophir’s Postal History
Background
In 1862 gold was discovered on the sheep station owned by Charles William Black and the area quickly became known as Blacks Diggings. Six years later in 1868 the population was approximately 600 as the miners came into the area and spread into the surrounding hills.
To service the growing population the Post Office was opened on under the name “Black’s Diggings” It was in a general store and the storekeeper James Swanson was the first Postmaster on a salary of twenty pounds a year. The mail was delivered as part of the Palmeston to Alexandra mail service.
Following the discovery of readily won gold in substantial quantities at Gabriel's Gully, Tuapeka, in 1861 the rush of gold miners soon penetrated further inland finding gold in a growing number of other sites along the Clutha and other rivers. Manuherukia (which became Alexandra) was rushed in 1862 and miners from there either moved west up the Clutha or north up the Manuherikia where Black's was rushed followed by Dunstan Creek (St Bathan's) soon after-wards.
Post Offices were opened on each goldfield within a few months and a regular mail service was introduced from via Palmeston through () to Dunstan Creek, thence south down the valley through Black's to Manuherikia. At first a packhorse mail coaches later took over.
Highway 85 only partially follows the old coach route today as the opening of the Central Otago Railway swung traffic and business centres away from the declining goldfields. This railway was open to the new settlement of Ranfurly by December 1898 and by December 1901 had been opened to . From here the line twisted through the Poolburn Gorge into the , and was opened to Omakau 1 September 1904, to Chatto Creek 30 July 1906, and to Alexandra 18 December 1906.
Mail which had previously been carried by coach now travelled by rail. In recent years with the cessation of railway passenger services mail was carried by motor coaches and now by NZ Post vehicles.
Postal Services
To service the growing population the Post Office was opened on under the name of “Blacks Diggings”. The name was changed to “Blacks” on . On the post office officially became “Ophir”. A few months later on a Money Order Office was opened as well.
OPHIR
Ophir is today a scattering of houses around the old stone historic Post Office. It is on the , at the north end of the Ophir Gorge, and on the eastern side of the valley flats, being backed by the steeply rising .
By 1868, when the miners had spread into the hills in the west, the population was approximately 600 but as gold prospecting declined people turned to farming and later fruit growing the population dropped, and it was 142 in 1946 and 57 in 1976. The Ophir Post Office serves local households today as well as the many tourists who send post cards home and purchase postal items.
The present name Ophir was given by James Macandrew, Otago Province Superintendent, after the Biblical Ophir, from where King Solomon obtained the greatest part of his gold. Ophir or the Hebrew Otira, is derived from Arabic apher or afr meaning "to flow". The Biblical Ophir is near the present day Sharm el Sheik in the southern Sinai desert.
The name of the town was changed to Ophir on when a town was proclaimed here.
There was concern about the future of the Post Office in 1974, when the postmistress retired, but it continued on an agency basis open 9 am to noon daily. From the building which stands today, was erected in 1886 for the Post Office. It is of schist masonry with plaster quoins and window dressings. It was acquired by the New Zealand Historic Places Trust for preservation and is continuing to operate. Today it is an NZ Post Agency Office.
Postmarks
Postmarks, Postal markings or cancellations are used to confirm the mail has been accepted and to prevent the stamp being used again.

The first post mark was the 0.44 obliterator of the mid 1860’s. Called the obliterator simply because it obliterated the stamps.

The first Coin date stamp was probably introduced in October 1875, followed by two other Coin date stamps until today’s date stamp was introduced on . July 1977.
Stamps
On The New Zealand Historic Places Trust acquired the Ophir Post Office and continued to operate it as a community Post Office. There is a postal delivery contract with New Zealand Post and a range of stamps and postal services are offered. 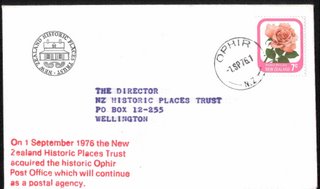 One of the 1040 souvenir covers produced that day 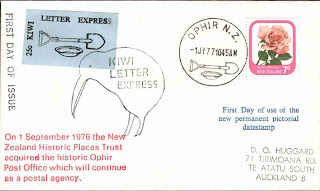 First day of issue for the new pictorial datestamp.
Architectural Stamps
In 1982 the Post Office released and Architectural issue of 4 stamps. The 35cent, and most expensive stamp, was of Ophir Post Office. 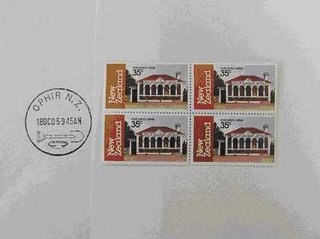 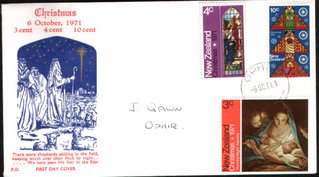 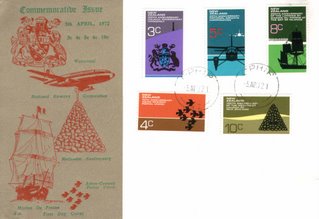 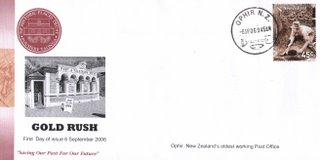 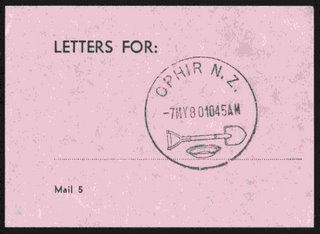 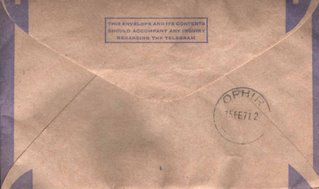 This envelop shows the post mark on the back of the envelop. Mail received at Ophir Post Office was stamped to show the date it was received at the Post Office. 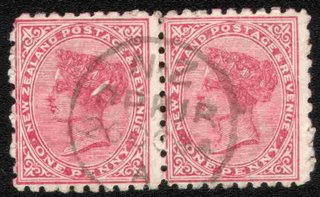 Postmark is Ophir 26 October 1894
This is very rare in that the Ophir post mark is also on a flawed stamp. The flaw is called the Scewdriver Flaw. These stamps were issued in 1882 – 1900. 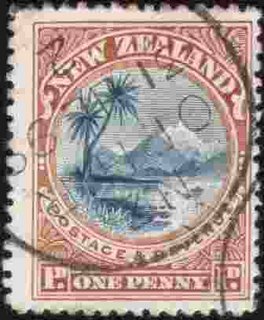 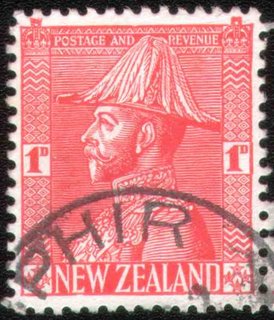 People
James Swanson was the first postmaster as he was the owner of the store. He was paid a salary of twenty pounds per annum.
Gustavicus Carlbasch became postmaster on .
Succeeding post masters were
Samuel North
Samuel Leask .
James Alexander was appointed postmaster on and 5 weeks later the Name of the Post Office was changed to Ophir when a town was formally proclaimed here. Alexander's salary was thirty pound a year and remaining unchanged even though money order facilities were added to the office from and telegraph facilities, call sign OPI, in 1881.
In 1884 it was decided to upgrade the office to a full time position and Alexander accepted this, on a salary of 185 pounds a year.
J C Williamson was postmaster in 1889 on 150 pounds a year, and he was transferred to .
Tim Buckley
Joseph Hay .
Arthur G Williams was Acting Postmaster when the Post office was downgraded on .
Miss E Blackmore 1898 was placed in charge as a local resident
J A Holt was appointed Postmaster and telephonist in October 1901 when it reverted to permanent status. A Eagle was the cadet.
Mrs a Murphy was appointed in 1906 and W J Stafford was messenger.
T E Connelly appointed
Miss J M McKay 1914
Mrs M M Grahame 1915
Mc Carry 1922
Miss M E McRae 3 Jan 1923 when it again returned to non classified status.
Miss R J McKnight 1924
Mrs M E Drake 1942 to December 1969
Mrs M O Nelson December 1969 to
Mrs S M MacDonald August 1974 to January 2002
Mrs V J Butcher January 2002 onwards.
Posted by Alan Jolliffe at Sunday, March 16, 2008

Email ThisBlogThis!Share to TwitterShare to FacebookShare to Pinterest
Labels: Heritage

This is such a lovely idea! I totally want to try this!!
Name plate for lawyer