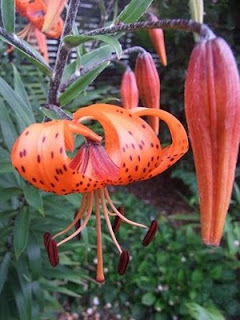 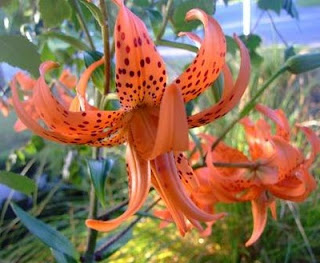 L. lancifolium ‘Flore Pleno’
The botanists are still fighting over its correct name but I think this name Lilium lanciflorum is winning. However many people will know this plant a Lilium tigrinum or Tiger lily. It has also had an earlier name L.sinense (Nois ex Stead).
It is also believed to be a very old and ancient hybrid between Lilium maculatum and L. leichtlinii. It has been described as lily in cultivation in the world. This botanical investigation is backed up by modern science as its chromosome numbers identify it as a triploid. This makes it a vigorous plant and because of its triploid nature it does not produce seed.
A native of China, Japan and Korea it is found growing in a number of locations and soil types but it does not like lime or limestone areas. In the wild the flowers vary in colour from a dark yellow to a dark orange with purple or black spots on the petals. In these countries the bulbs were consumed as food up to 1000 years ago.
Its does not like lime soils and in ideal soils and poor soils without lime it will quickly naturalise large areas quite quickly. In Britain it is heavily infected with a virus but still manages to naturalise large areas. It is recommended not to grow this lily in close proximity to other lilies as the virus will spread to them as well.
It is easy to grow and forms a large bulb and the new stems grow rapidly each year up to abut 1.5 metres tall. Long narrow lanceolate leaves protrude from the stem. Depending on location and parentage of the clone they can be quite hairy with lots or a little of white cobwebby long hairs on the stem and leaves. Set at the base of the leaves is a small bulbil which can be planted in the ground to rapidly increase this plant.
It is widely grown and depending upon size can produce up to 25 flowers in a head born on black stems. The most common colour is deep bright orange petals and sepals heavily marked with dark purple spots. The pollen is purple brown in colour. Some clones will be a little softer in colour.
This bold display of flowers appears in NZ in January. They hang from stems and have reflexed petals (and sepals) creating a nodding Turks Cap flower.
L. lancifolium ‘Flore Pleno’ (l.l. Florabunda) which has large double flowers.
L. lancifolium ‘Giganteum’ a larger growing form
L. lancifolium ‘Splendens’  with large glossy flowers of a rich salmon red colour.
L. lancifolium var flaviflorum a yellow purple spotted form which does set seed.
L. lancifolium var. fortunei with densely woolly stems
L. lancifolium var. simplex a single flowered form
L. lancifolium var. plenescens which has six series of petals and sepals.
This easy to grow lily makes a fine show in mid summer in any garden. It will increase and naturalise quickly.
Posted by Alan Jolliffe at Thursday, January 28, 2010

I love the Lilium lanciflorum or Tiger lily! Mine all grow well without a virus ... Is that limited to Europe? I do have trouble with red beetles... sorry I forget their scientific name. They were horrid last year. Is Turk's Cap another lily all together or another name for this lily. I thought it was another lily?? I have been confused about this for some time. I know I could have googled and found my answers. Lovely Lilium lanciflorum images! ;>)

Dear Alan, I am glad I didn't miss this post. It made me feel like I am back home in Russia. First, the portrait and the words of Lev (Leo) Tolstoy. Second, the lily. We have wild Tiger lilies in the Russian Far East. Red-orange and yellow. I remember picking them up in the forest and bringing home. Thank you for the great images and nice, informative post!