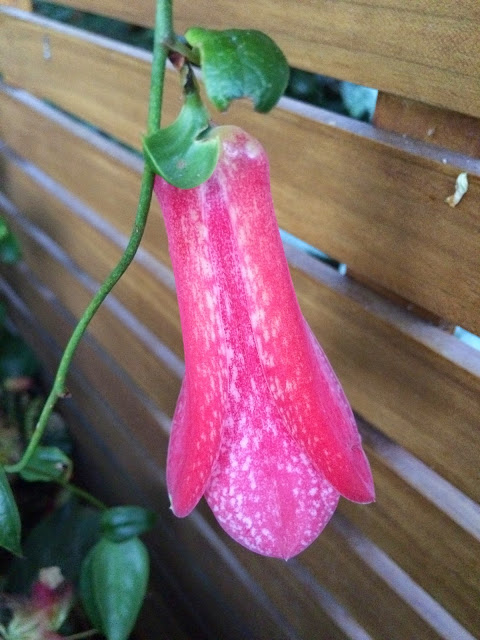 Lapageria Photos. Have a look at Alan Jolliffe Lapageria on Pinterest

Lapageria is a monotypic genus meaning there is only one unique species of this fantastic plant.
The National Flower of Chile it is known to festoon the trees, shrubs and natural areas in Chile making a spectacular sight.

It has been called the “aristocrat of climbers”, one of the “greater glories’ of climbers and one of the most beautiful of all flowering climbers. Certainly plant collectors and horticulturists  want to obtain and grow this plant, not just one but as many as possible.

As ann aristocrat it is fitting it was named after Empress Josephine de la Pagerie of France (http://en.wikipedia.org/wiki/Jos%C3%A9phine_de_Beauharnais) and was pursued by Napoleon and married him. She was a keen gardener particularly with roses.

Interestingly Lapageria belongs to the family Philesiaceae ( some earlier botanists had it as Liliaceae) which  includes only two genera Lapageria and Philesia making it a member of one of the smallest flowering plant families. It was discovered in 1847 and the white form discovered in 1854. Lapageria rosea was introduced into cultivation in Europe at Kew Gardens in 1874.

To grow this plant well one needs to understand what conditions it likes best and how it  grows in its native habitat.

Strong, wiry, slender, twinning stems grow from underground rootstock and these stems may reach 5 metres long and of course need some support because in the wild they climb over nearby plants and trees. These stems are supported by a strong root system which needs unrestricted, well drained and humus laden soil conditions. It grows best in a cool place with deep, moist acid soil, well drained and with lots or organic matter and mulch.

It like humidity, moderate summer temperatures, needs sun but dislikes long exposure to very hot bright sun. Best if it has some partial shade in the sunniest part of the day. It will not tolerate heavy frosts either. If they do die down they will grow again from the strong rootstock. So choice of position is critical.

Spectacular rosy crimson flowers with white spots may appear in late spring, summer and autumn on older stems not new ones. These distinctive, beautiful, bell shaped flowers air about 8cm long with six long, heavy, fleshy, waxy petals hang singly or in clusters from leaf axils on the upper part of the plant. Flowers usually appear on old wood rather than new and last for several weeks.

Traditionally there have been two colours, rosy crimson the actual species, and pure white Lapageria rose ‘albiflora’. Today there are  many shades and named cultivars grown in the world. Many have been raised in the USA. (See websites below). Some plantsmen recommend growing these two varieties together.

The flowers are followed by small, yellow green, oblong, fleshy fruit (technically called berries) and inside  amongst the sticky pulp are ovoid shaped seeds. They take a long tome to mature.

As a single species which has its main flower colour as red cross pollination of flowers which have slight or significant  colour variations can lead to new forms being grown. Even the long known white variety will not produce white off spring from seed. However in recent years there has been a range of colours produced which are interesting and in future we may see some more.

The flowers have to be cross pollinated from another flower or plant in order to set seed. Autumn sown seeds germinate  in spring but some seeds may take over two years to germinate.

When harvesting seeds they should not be allowed to dry out and when sown will germinate  in about 13C after about 5 weeks.

Like many plants  once grown from seed we may still have to wait 3 -5 years for  the new plants to flower. Layering of special coloured forms using strong stems is another way to increase the number of plants but it is slower.

Slugs and aphids are the two major pests that need to be controlled on these plants.

As the flowers are pendulous they could be grown over an arch and allow the flowers to hang down in spectacular display.

the following websites provide some further information and extremely good photos of a range of colours.

History of Lapageria at University of California Botanic Garden

Photos from U. California Botanic garden

Email ThisBlogThis!Share to TwitterShare to FacebookShare to Pinterest
Labels: Climber