Luckily we were given tickets to the opening of this show and joined many others in Hagley Park for the Official Opening. A great night and a chance to see all the gardens and most of the exhibits while they were fresh and bright. I met with my friend Pascal Garbe from France (I met him in Canada this time last year) and we caught up with garden Tourism worldwide.
We had tickets for the show as well and attended again on Saturday when we really had time to study all the gardens and displays. Standout ones for me that showed a view to the future were, Glasstech with its modernistic glasshouse /entranceway, The emerging Designer with Compost system under the wooden boardwalk, The People’s Choice garden of Ben Hoyle SHE LOVES ME, SHE LOVES ME NOT, the alpine garden display, and the Landcare native garden. The outstanding garden was max’s Pipe dream designed and built by BECA consultants based on the theme of the great Hydro lakes of the Waitaki river  managed by the great engineer Max Smith.
In the Starlight tent I had to view the exhibit fresh Start-New growth display featuring rubble from the demolished Music Centre (I chair the Music Centre Trust) and showing how plants can take over soon after a natural disaster.
In the Floral Art marque several people I knew produced fantastic floral designs at the cutting edge of their art. Of course the medal awarded to the Festival of Flowers creation was wonderful.
I also spent part of three days judging and speeches of the Young Florist of the Year competition. This was  but one small part of a gruelling three day event for these young creative people. The best part was being able to help award  their prizes and certificates on the final day.
All in all another great show. I would still like to see more horticulture and garden ideas for the future but in the aftermath of the earthquake everyone did very well. 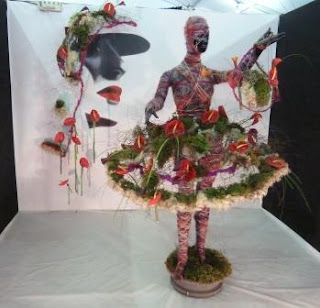 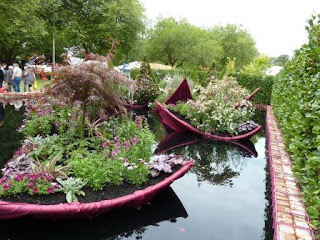 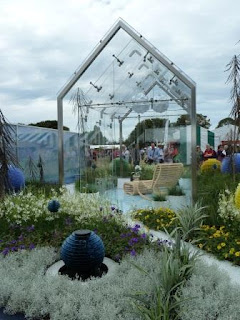 My choice of a modern garden
Posted by Alan Jolliffe at Wednesday, April 11, 2012