Its a Fuchsia! Fuchsia procumbens 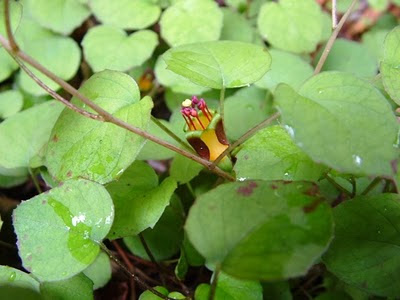 This is the most unusual fuchsia in the world as it is the only species that holds its flowers upright - all the rest have pendulous flowers or flower in trusses. Not only that the pollen is blue at the end of red filaments and it is reputed to be the only yellow fuchsia. The flowers are small and sit upright on the stems. The cherry sized, showy, bright red, seed filled berries that follow are more noticeable.

The flowers are orange yellow in colour with the sepals dark purple. The blue pollen orange yellow flowers and the purple sepals work well as a colour combination.

As a ground cover it grows fast and covers a lot of ground each year. It is easily pruned back each winter to keep it under control. The long trailing stems will also put down roots so that it can make a nice mat. Grow in part shade with average to low water and is excellent under rhododendrons.

Apart from the naturally growing green leaved form there is a variegated cultivar with silvery white markings on the leaves.

It grows naturally in NZ in sandy, gravelly or rocky places near the sea in the north of the North Island. It was discovered by Richard Cunningham who collected it in 1834 at Matauri Bay between Whangaroa and the Bay of Islands and it was a form with a long style with a large globular stigma protruding from the flower. T Kirk collected a short styled form from Tryphena harbour, Great Barrier Island in 1867 and named it F. kirkii. However it was later noted that there is a great variation in the length of the style but it is all the same species. As Cunningham collected and named his species first F. procumbens is the official name.

In the garden in the south it survives well but will loose its leaves over winter becoming deciduous. Each spring new leaves appear rapidly making a nice fresh groundcover show.
Posted by Alan Jolliffe at Sunday, May 23, 2010

Wow that amazing, never heard of this kind of Fuchia.

I want one.
Janet tillman