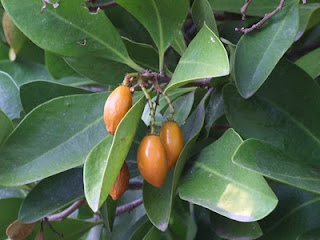 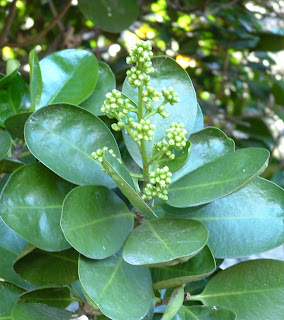 This is a handsome hardy coastal native tree found along our coastlines from Banks Peninsula northwards. Its firm, dark green, evergreen, leathery leaves give it a semi sub tropical look.

It is a medium sized tree growing up to 10-15 metres tall with a dense bushy evergreen top. The trunks are strong and may grow up to 600 mm in diameter. The thick leathery leaves vary in size from 75 to 200 mm long and 50 mm to 95 mm wide giving them that sub tropical look. The very small greenish flowers a groups together on short stems and after flowering the large fruit form. These are drupes up to 40 mm long with a smooth orange skin when ripe.

The fruit was very important to Maori as a food source and some say second only to kumara. The flesh was eaten raw but the seeds, which are poisonous, required treatment before they could be eaten. So poisonous are the fruit they can cause convulsions and paralyse muscles sometimes causing death. To treat the seeds they were collected in large baskets, placed in hangi and steamed for some hours. Then they were transferred to loosely woven baskets and washed in running water and cleaned of any pulp etc. Following this they were sun dried and stored. When required for food they were cooked in a hangi to soften them.

Interestingly recent ecological research has led to some thinking that the karaka may have only naturally grown in the north of the North Island and that Maori distributed seeds and plants around coastal areas as food supplies. Further research is being done on this idea.

In the garden or coastal areas the Karaka establishes quite well and will grow in adverse conditions. In the garden it is wise to place it at the back of a border, where it makes a nice background and also because the fruit can produce a rather pungent smell.

There are at least four variegated form of the karaka

I just discovered your blog via Blotanical and pleased to have done so. I look forward to getting to know you this year... speaking of which, Happy New Year.

Nice blog with nice picture of Corynocarpus laevigatus – Karaka. I am not at all familiar with this plant, but it sounds like one I would like to get to know better.