The Roots of a Gardening Obsession

How an 18th-century American farmer transformed England's approach to horticulture

At this moment a dozen tomato plants are "listening" to taped voices through headphones that are clamped to their pots. They are part of a trial run by the British Royal Horticultural Society in their garden Wisley in Surrey, England. On April 1, the RHS invited the public to audition for the nation's most plant-friendly voice -- a sort of "American Idol" for plants. Forty-five competitors, including Sarah Darwin (Charles Darwin's great-great-granddaughter), read Shakespeare's "A Midsummer Night's Dream," recited poetry and talked to the plants. Then the judges whittled the list down to 10 contestants -- the voices the tomato plants are currently hearing. After 30 days the plants will be measured and the voice that "produced" the most flourishing specimen will be announced as the final winner of the Voice of Wisley.

Colin Crosbie, the superintendent of the trial, says the RHS is quite serious about discovering "how plants respond to voices."

The British are obsessed with gardens. Each year they spend almost $6 billion on their gardens, close to what the country spent last year on military operations in Afghanistan and Iraq. Ten-year waiting lists to rent a tiny plot in inner-city community gardens are nothing unusual, and for some Brits, gardening has become so important that they speed date with a horticultural theme -- so-called "speed gardening" during which potential dates are judged by their green-fingered talents.

As the earth warms up and we put on our gloves to get the beds ready for another year of color and scent, many of us will look to England as the motherland of horticulture. What is there not to adore about the gently rolling parkland, thatched cottages hidden by rambling roses and kaleidoscopic herbaceous borders that look effortlessly natural? But what few people know is that the English landscape garden has its roots in America. The colonies' towering trees, flowering shrubs and glossy evergreens gave English gardeners in the 18th century the "living pencils" to draw the landscapes we adore so much today. These trees and shrubs provided the shapes and colors that created the first "natural" landscapes in England. It was America that freed England from the corset of patterns and topiary that gardeners had imposed on nature in the 17th and early 18th century. 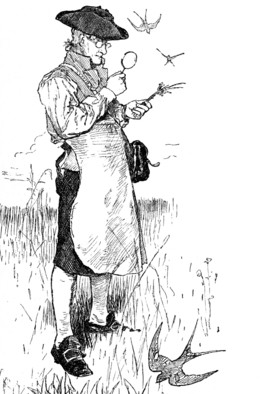 American farmer John Bartram was instrumental in the transformation.

It all began in 1733, when the American farmer John Bartram dispatched two seed boxes from Philadelphia to Peter Collinson, a London cloth merchant and passionate plant collector. For years Mr. Collinson had tried to use his trading connections to augment his flowerbeds. "Forget not Mee & My Garden," he wrote to his business partners, but very few answered his pleas.

His friendship with Benjamin Franklin eventually put him in contact with Mr. Bartram. Mr. Franklin was Mr. Bartram's greatest supporter in Philadelphia (a few years later they would found the American Philosophical Society together) while Mr. Collinson was one of Mr. Franklin's best friends in London, where they had met in the 1720s. Over the next 40 years Mr. Bartram sent hundreds of seed boxes to Mr. Collinson, which would transform the English gardens. He lived on a farm just outside Philadelphia, but every fall he would leave his fields in the capable hands of his wife to go plant collecting in the frontier wilderness. Endlessly crossing ridges and streams, he traveled thousands of miles and climbed up the highest pines in search of new species for Mr. Collinson and his gardening friends.

Mr. Bartram rode through the Appalachian Mountains, which were blanketed in trees. "I had ye fines prospect of ye largest Landskip that ever my eyes beheld," he wrote to Mr. Collinson, who was following the journey from the comfort of his armchair. Mr. Bartram saw the fiery fall leaves of red maples, scarlet oaks and flowering dogwoods against the dark needles of conifers such as Eastern hemlocks and white pines. Beneath the trees grew thickets of rhododendron and evergreen kalmias.

Over the next decades Mr. Bartram went farther and farther, zigzagging the colonies from Lake Ontario to Florida. He collected Magnolia grandiflora from South Carolina, the fringe tree with its dangling tassels of white blossom from Virginia and balsam fir from the Catskills. When his saddlebags were filled Mr. Bartram went home to begin the laborious packing of the large wooden seed boxes. The seeds of each species were neatly wrapped in paper and labeled so the English gardeners knew what they were receiving. Each winter dozens of these boxes crossed the ocean to London where Mr. Collinson excitedly waited to distribute the American treasures to his friends. 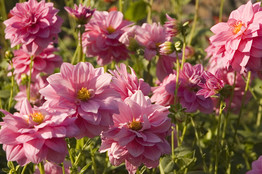 The grounds at Newby Hall. 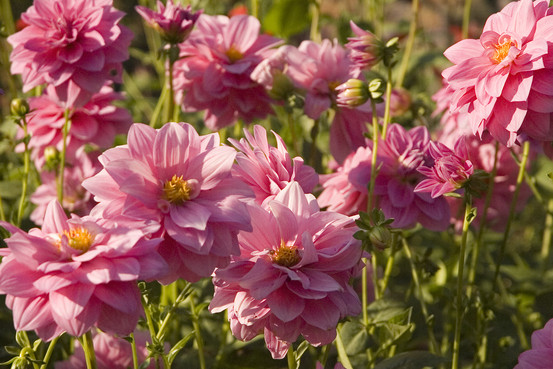 For the first time the English gardeners had a vast choice of plants that would bring beauty and variety to the garden at all seasons. Until Mr. Bartram began sending his boxes, fall in England had been a fairly muted affair. Now the falling of leaves was preceded by an extraordinary show. White ash competed with the bloodied foliage of tupelo, and the glowing reds of the maple leaves with the aubergine purple of sweetgum. There were winter flowering shrubs such as witch hazel, and arrowwood, which blossomed in spring and produced berries in the fall. The creation of year-round beauty on such a scale was an entirely new art.

The gardener who was the most accomplished in "painting" with Mr. Bartram's plants was Lord Petre, Mr. Collinson's closest friend. At his estate Thorndon in Essex, Lord Petre created a revolutionary landscape garden that was populated with American species and became the model for many others. Everything he did was on a large scale -- he wanted tens of thousands of seeds and "Horse Loads" of pinecones for his 1,000-acre park. By the early 1740s more than 200,000 foreign trees, shrubs and flowers were growing at Thorndon. Mr. Collinson was so enthralled that he wrote to Mr. Bartram in 1741, "when I walk among them, One cannot well help thinking He is in North American thickets -- there are such Quantities."

Lord Petre eschewed the formal arrangements and straight lines that had underpinned the gardens of the late 17th and early 18th century in which no flower head or branch was allowed to grow unruly. Instead, he and other gardeners began to use Mr. Bartram's trees to provide shapes and patterns -- they offered columns, cones, pyramids or spheres without the need for pruning shears; branches feathered down or twisted towards the sun. Some trees grew so bushy that they were green barriers, while others were as delicate as ornamental latticework against the sky. Once mature, the conical shape of Mr. Bartram's red cedar, for example, provided vertical brushstrokes, while kalmias and rhododendrons spread in looser, more horizontal lines. The smoothness of the white stems of young paper birches contrasted to the flaking bark of American sycamore or the scaly, almost square plates of the shortleaf pine.

English gardeners wanted their plots filled with these dazzling American plants -- so much so that some even commissioned thieves to steal them. In 1766 Mr. Collinson's shrubbery was raided for the third time by thieves who clearly knew what they were doing because they only stole the precious American species. To deter criminals, Mr. Collinson and his friends had a Parliamentary Act passed that same summer whereby plant thieves could be punished with transportation to, almost ironically, one of the American penal colonies. Today nothing much has changed in Britain. According to insurers, garden crime is on the rise and British thieves still think it's worth uprooting trees and emptying flowerbeds.

By the end of the 18th century England was gripped in a flower frenzy and the ownership of a garden had become a perquisite of happiness, and maybe even Englishness itself. Women decorated their wigs with festoons of silky blossoms and miniature groves complete with figurines of gardeners. "Eleven damsels," one onlooker observed at a dinner party in 1777, "had, among them, on their heads, an acre and a half of shrubbery, besides slopes, grass-plats, tulip-beds, clumps of peonies, kitchen-gardens, and green-houses." That infatuation is still on display today when gardeners at the Chelsea Flower Show give their flowers a "blow dry" with hair dryers (to encourage the flowers to unfurl their opulent blossom a little more quickly).

Mr. Bartram's trees and flowers laid the foundation of the English garden and by the time of his death, in 1777, his American plants were available in nurseries across Britain. By then the English garden had become so popular that its plants and designs were exported abroad. In France and Germany, Italy and Russia, gardeners recreated "le jardin anglais," "der Englische Garten" and "il giardino inglese," consisting of Mr. Bartram's American trees. Garden tourism in England also became popular. In 1786 Thomas Jefferson and John Adams went on a garden tour through England, and even the Anglophobic Jefferson had to admit that "gardening in that country is the article in which it surpasses all the earth."

In turn, the Americans began to appreciate their native species. Mr. Jefferson realized that the pleasure grounds he had seen during his garden tour were actually more American than English. It would be easy to recreate something similar in the United States, he said, "we have only to cut out the superabundant plants." Only half a century after Mr. Bartram sent his first seed box to London, American gardeners were scouring their own forests for ornamental trees. George Washington, for example, created a shrubbery at Mount Vernon that consisted of native species only. 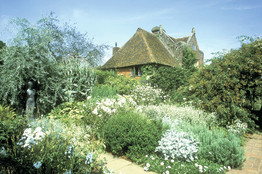 In the 1700s, English gardens moved from a formal to a more natural style. Popular gardens now include Sissinghurst -- especially known for its White Garden. 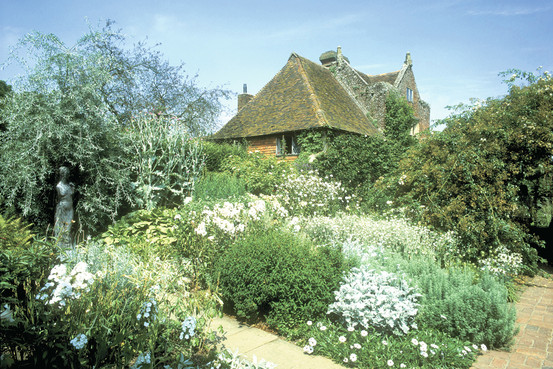 Today the taste for growing native species is gaining momentum again across the U.S., and garden tourism is still strong. Every year thousands of Americans make pilgrimages to imposing pleasure grounds such as Stowe in Buckinghamshire or Stourhead in Wiltshire. Horticultural gems such as Hidcote Manor Garden in Gloucestershire (actually created by an American!) or Vita Sackville-West's Sissinghurst in Kent remain high on the itineraries of American tourists. John Oddy, executive director of the Royal Oak Foundation (the U.S. branch of the British National Trust), says that almost 90% of their members that travel to Britain will visit famous gardens.

For American gardeners, there is no reason to be envious. Yes, the English garden is glorious but there are two consolations. Today's English gardens, from the small suburban yards to large parklands, are crowded with the descendants of the plants that Mr. Bartram dispatched, ranging from vibrant flowers such as echinacea, phlox and scarlet beebalm to majestic tulip poplars, magnolias and southern catalpas. The English garden would have never become famous across the Western world had it not been for the American plants.

The other consolation is that we non-Brits have been saved from a terrible ailment which has only recently been diagnosed by the Royal Horticultural Society: "plant bereavement." Half of the time their telephone advisory service counsels traumatized victims of damaged flowers and trees rather than dispensing horticultural tips. It's not easy for English gardeners, the RHS's principal horticultural adviser Leigh Hunt says, because "much like people who lose a parent or child, gardeners often also go through the same stages of grief -- shock, denial, anger, depression and acceptance." Isn't it a relief not to be a English gardener?

Andrea Wulf is the author most recently of "The Brother Gardeners: Botany, Empire and the Birth of an Obsession."