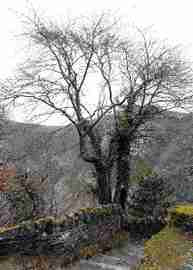 TREE discovered in a search for new species has been named after a no parking sign.

The prosaically-named no parking whitebeam is one of 14 new species of tree just given names in a project led by the National Museum of Wales.

Dr Tim Rich, the museum’s Head of Vascular Plants, led a group of botanists from Kew Gardens and Bristol, Bath and Exeter universities in the hunt for the new tree species.

Six out of the 14 discovered were found in Wales but they had to travel further to log the “no parking” tree.

As many trees and plants are named by the place or circumstances in which they were found, the species won its unusual moniker because the individual tree under study had a no parking sign nailed to it for many years.

The tree (full name Sorbus no parking) is in a glade in Watersmeet, a hamlet between the villages of Lynton and Lynmouth in Devon. And it has the official Latin botanic name of Admonitor, which means to admonish or tell off.

There were suspicions for some time that the no parking whitebeam was different to similar local species, but chemical analysis has now confirmed this. Even its leaves have different lobes to local trees.

The no parking whitebeam name has now been listed in Watsonia, the official journal of the Botanical Society of the British Isles.

The British species search has coincided with two anniversaries – the bicentenary of Charles Darwin’s birth and the 150the anniversary of the publication of his seminal work, On the Origins of Species.

The six new Welsh species include the hybrid Motley’s whitebeam (Sorbus motleyi) found at Merthyr Tydfil, a cross between a rare Ley’s whitebeam and a rowan tree.

Dr Rich believes the Merthyr hybrid formed during the infamous 1989 hurricane when conditions were right for hybrids to be formed – gaps in treelines let in light allowing windblown seeds to germinate.

It was first found by Graham Motley of the Countryside Council for Wales, and was named after him.

Another newly-discovered Welsh variety is the Stirton’s whitebeam (Sorbus stirtoniana) which can be found at Craig Breidden Cliffs in Monmouthshire.

The tree is named after Professor Charles Stirton of the National Botanic Gardens of Wales.

The Llangollen whitebeam (Sorbus cuneifonia) can be found on the Eglwyseg Mountain in Denbighshire and around 100 Welsh whitebeams (Sorbus cambrensis) are near Abergavenny.

The Llanthony Valley whitebeam (Sorbus stenophylla) is named after the place where it was found – there are 200 of them in the valley – and the Doward whitebeam (Sorbus eminentiformus) can be found in the Wye Valley.

They are all named either after the person who found them, the place they were first discovered or the way they look.

Dr Rich explained: “The Motley’s whitebeam, for instance, is an example of evolution in action.

“It originated as a cross between Ley’s whitebeam and rowan in a wood near Merthyr Tydfil after the 1989 winds created perfect conditions.”

And the no parking tree?

Dr Rich said: “They have much more strongly-lobed leaves, so they are easy to identify. It was given the name no parking tree by locals because of the sign which hung on it.”

He added: “Some of these trees have developed recently and are an example of ongoing evolution.

“Some are older types which have been known about for some time but which have only recently been described as new species because of modern DNA techniques.”

Weird and wonderful world: next page

Plants have a whole host of weird and wonderful names, often reflecting what they look like or what they do.

Both three-birds flying and the white egret flower have blooms that resemble birds. Botanists believe this could deter predators.

Snapdragons are named because when the blossoms are gently pinched, they resemble dragons with open mouths. The balloon flower has round, inflated balloon-like flower buds.

The firecracker plant produces unusual reddish-orange flowers that eventually turn into exploding seed heads. When drops of water hit the pods, seeds pop out, flying up to 20ft away.

The resurrection fern has the uncanny ability to seemingly die and come back to life. How? When there is not enough rain or water, the plant dries and shrivels up into a ball. Once water returns and is absorbed by the plant, however, it will turn green and begin growing again.