THE DAFFODILS OF HAGLEY PARK 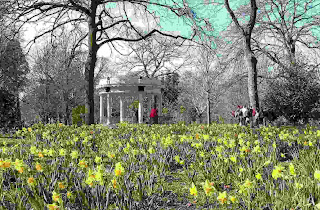 James A McPherson, A.H.R.I.H., N.D.H., was the first New Zealander appointed as Curator of the Botanic Gardens. He served from 1933 to 1945.
The Rose Garden, Rock Garden, original Cockayne Garden, the Azalea and Magnolia collections were all designed and planted under his direction. However, perhaps the most important feature for which he was responsible is the planting of hundreds of thousands of daffodils in the Woodlands.
This is one of the most spectacular springtime attractions in the Botanic Gardens and one that is featured on calendars and in travel brochures and the like.

The Woodlands covers an area of 2 hectares between the Avon River and Christchurch Hospital. Tall oak and ash trees dominate the area providing shelter and diffuse the spring sunlight. The pasture¬ like grassland provides ideal conditions for the naturalization of daffodils and other bulbs.

Planting began in the autumn of 1933 and the 1933/34 Annual Report stated that the flowering of 16,000 bulbs was successful providing encouragement to continue planting.

In the 1934/35 Annual Report, McPherson wrote "when 66,000 Narcissi bloomed in the Band Rotunda Woodland last spring it gave some indication of what can be achieved by the public in their co-operation in supplying surplus bulbs for planting. At the end of the year under review, the total number planted reached the encouraging figure of 108,000. It is anticipated that these will make a striking, picture during the coming spring."

This is the first mention of public co-operation in the project. The figures suggest 50,000 bulbs were donated and planted in 1934 to flower in September of that year. By 31 March 1935, a further 42,000 bulbs were planted.

Obviously, the people of Christchurch were completely behind the project. No wonder McPherson was enthusiastic about the anticipated flowering in spring.
McPherson's Annual Report of the next year (1935-36) reports on the "...continued generosity of many citizens." A further 24,200 bulbs were donated making the three year total 132,440. He suggests a further 100,000 will complete the planting and that more narcissi planting will be in Little Hagley Park and along the banks on the Avon facing Park Terrace. This was an ambitious and colourful plan.

In 1936/37 15,000 bulbs were added to the planting bringing the total to 160,000. On Sunday 21 September, approximately 8000 people visited the area. Obviously at this time, four years after the first planting, McPherson's dream and vision had been realised.

Writing in his 1937/38 Annual Report, McPherson wrote "…This area is becoming increasingly popular as evidenced by the fact that on Sunday 26 September (1933), fully 5000 persons visited the daffodils in bloom. The additional planting of bulbs during the year now brings the total in this area to 220,000. We have now reached a stage when it may be advisable to institute a "Daffodil Sunday" on similar lines to institutions overseas. If properly carried out it would certainly benefit the revenue of the City's Tramways Department."

Again, we see the foresight of McPherson in action. Not only had he added a further 60,000 bulbs in one year, he was looking into the future in promotion this feature he had created. Further, he saw the prospect of other City Departments (Tramways) playing an important part in the promotion of the daffodils as well as a method of transport for people who could not otherwise get there.

The inaugural "Daffodil Sunday" was held on 25 September 1938 and from all accounts, was an outstanding success. It was estimated that 10,000 people visited the area on that day. McPherson called the daffodils "...one of the City's chief springtime attractions." During that year, he planted a further 46,000 daffodils, all donated.

Daffodil Sunday the following year attracted some 5,000 people and a further 6,000 people visited the daffodils the next Sunday. In that year, a further 34,000 bulbs were added to the woodland.

By March 1941, a total of 340,000 bulbs had been planted in six years. The majority, if not all of these, had been donated by members of the public. Daffodil Sunday of 22 September 1940 again proved very popular with over 8,000 people visiting the Woodland. An additional feature was a collection that was taken up. A total of 171 pounds 16 shillings and 9 pence was added to the Board's funds. The purpose for the funds use was not given.

The next year, only 6,800 daffodils were added but 3,600 Grape hyacinths were also planted. This is the first mention of the planting of bulbs different from daffodils. The collection on Daffodil Sunday of that year raised the sum of 41 pounds which was earmarked to provide playing apparatus for the Children's Playground.

During the next year, an additional 58,788 daffodils were added to the Woodland. This brought the total over 8 years to 405,588 bulbs. McPherson, in his Annual Report (1942/43) stated "...with the natural increase it can safely be said that the Woodland contains half a million bulbs. The original scheme is now completed and the Gardens have a magnificent daffodil woodland, spring feature a definite and very popular spring feature."

On Daffodil Sunday, 27 September 1942, over 18,000 people visited the area.
The collection on that day was 250 pounds and it was given to the Patriotic Fund.

In McPherson's Annual Report of 1943/44 he says that an additional 3,830 Narcissii and 4,000 Grape Hyacinth bulbs were planted. This brought the total to 409,418 Narcissii and 14,000 Grape hyacinths.
He goes onto state "…allowing for natural increases the woodland produces over a million blooms in springtime. Daffodil Sunday is now a noted feature of the city. This woodland is an example of what can be achieved by community effort. All bulbs, with the exception of 40 pound worth have been donated to the scheme by the people of Christ¬church and surrounding districts."

In later years, under the supervision of succeeding Directors and Curators, additional plantings of Narcissii have been made. Other bulbs such as snowdrops and bluebells have also been planted to extend the flowering season.

James A. McPherson created many features in his 12 years of assoc¬iation with the Botanic Gardens. Nothing compares however, with the Daffodil Woodlands. This magnificent feature hit at the hearts of people who gladly donated 400,000 bulbs to the City.

The Woodlands is perhaps the most well known feature of Christchurch's landscape. It features in travel brochures, publications, films, videos and in hundreds of thousands if not millions of holiday snapshots.

If it had not been for the dream and vision of one man, James A. McPherson, and the help of the people of Christchurch and Canterbury, this spectacle of spring would not have been created. We owe a great deal of thanks to McPherson and all those people who donated bulbs. Without their support our spring would be a lot less exciting.
Posted by Alan Jolliffe at Tuesday, August 26, 2008